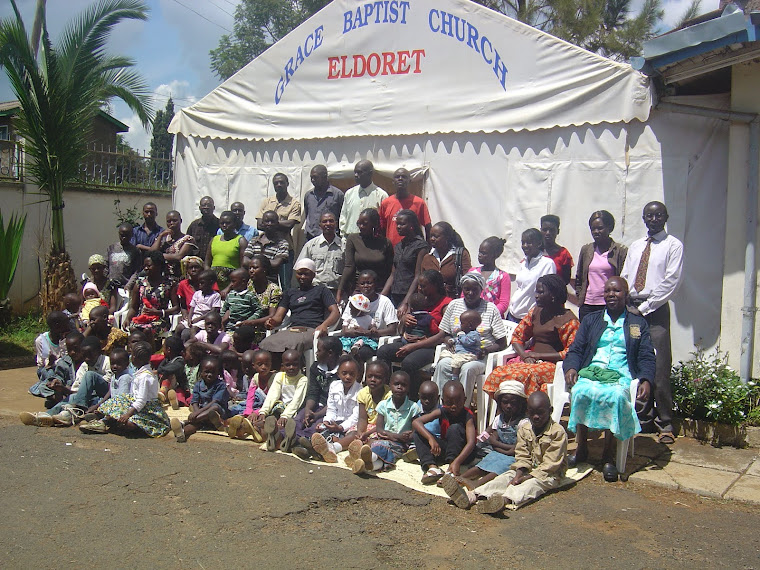 Dear Friends,
We are glad to report of the Lord’s blessings among us. 10th to 14th December will be remembered for a long time to come by those who attended this year’s Reformed Family Conference held at the Grace Baptist Church Kisumu.
This year’s theme was ‘The cross of Christ: A life changer’ with Pastor Victor Kanyense from Lusaka, Zambia as our speaker for a second year running. We were shown very ably and clearly through twelve sessions how the cross of Christ is not only central to the Biblical religion and, indeed to the Scripture as a whole, but specifically is central to the gospel of salvation. Christ’s death is not an example of how far love can take someone. The cross was a transaction between the Father and the Son. Wonderful as it is, election without the cross offers no salvation.
The results of the cross include propitiation, redemption, justification, and reconciliation with substitution being the foundation upon which the above four are built. The common thought that the cross demonstrates weakness and that we have to turn to the resurrection to find victory is false teaching. The cross of Christ is one big conquest from beginning to end; from Genesis to Revelation. Consider this: Conquest predicted (Gen.3:15); Conquest began in the ministry of Christ; Conquest achieved at the cross (Heb.2:14ff); conquest confirmed and announced at resurrection (Acts 2:24) and conquest consummated at the return of Christ (Rev.5). The demands of the cross include self-sacrifice, submission and conformity. The cross never leaves anyone the same; because for the perishing, it is foolishness while for those who are being saved, the cross is the power of God.
The cross is indeed a life changer as the risen Lord by His grace trains us to say “No” to ungodliness and worldly passions, and to live self-controlled, upright and godly lives in this present age (Titus 2:12). In the final session, we were shown how the solution to the church’s challenges is the cross of Christ (1 Cor.1:1-31). The speaker is endowed with the ability to communicate heavy truths in a way that even the young among us were able to follow; thus carrying everyone along. We truly thank God for Pastor Kanyense.
Workshops were held in the afternoons in three different groups. Pastor M. Maura led the youth in discussions on the life of Joseph in Genesis; bringing out the gospel and its relevance today. Pastor S. Oluoch handled one adult discussion group. He reports “it was basically the study of Genesis 1: 24-31 famously known as ‘cultural mandate.’ I laboured to help our people see the need for living for the glory of God in our daily activities and upholding Christian ethics in line with the mandate above.” Sam also gave the key-note address from Job chapter one alerting us of the tricks of Satan with his ‘all will be well theology’ which is meant to cloud the meaning of the cross. Due to the forthcoming General Elections, Pastor N. Ogallo led the second adult group on discussing ‘Christians and Politics.’ Various issues were discussed: Should Christians be involved in politics? If so, what kind of involvement? Can a believer contest a political post? Should I vote? Why? How? And what is the role of the church in politics? Finally, there was a special workshop which brought all the attendees together. Professor Owino Ong’or who is himself a believer and a medical Doctor led a very informative and challenging discussion on HIV & AIDS; facts about its origin, spread, consequences and the way forward particularly for believers.

Over ninety people were in attendance with some coming part-time. These came from different parts of the country. All pastors in attendance were given time to give reports of their labours and were prayed for. We had expected a higher number but various reasons were fronted as hindering some from attending. The organizing committee did a brilliant job both in planning and execution. Everyone was well fed with ‘first class’ and balanced food. The teaching sessions were all recorded and soon the Mp3 CDs will be ready for purchase. Last year’s recordings are also available for purchase.
We extend our sincere thanks to those churches and particular brethren who knowing our need, identified with us and graciously and generously partnered with us to make the conference a success. To all of you, we are grateful for your prayers for us and for your continued interest in the growth of the reformed faith in Kenya. While these continue to be “days of little things”, we however remain focused and proclaim: “You are worthy to take the scroll and to open its seal, because You were slain, and with Your blood You purchased men for God from every tribe and language and people and nation” (Rev.5:9).

Written by Naphtally Ogallo on behalf of ReCFoK.
Posted by Grace Baptist Church Eldoret. at 05:10 No comments:


“Jesus answered, "Most assuredly, I say to you, unless one is born of water and the Spirit, he cannot enter the kingdom of God” (John 3:5).
Posted by Grace Baptist Church Eldoret. at 04:42 No comments:


“God is faithful, by whom you were called into the fellowship of His Son, Jesus Christ our Lord” (1 Corinthians 1:9).
Posted by Grace Baptist Church Eldoret. at 04:41 No comments:


“just as He chose us in Him before the foundation of the world, that we should be holy and without blame before Him in love,” (Ephesians 1:4).
Posted by Grace Baptist Church Eldoret. at 04:40 No comments:


“so Christ was offered once to bear the sins of many. To those who eagerly wait for Him He will appear a second time, apart from sin, for salvation” (Hebrews 9:28).
Posted by Grace Baptist Church Eldoret. at 04:39 No comments:

Grace Baptist Church Eldoret.
Grace Baptist Church - Eldoret was constituted into a local church in November 2008. However, church plant work began in 2006 through one-to-one evangelism. Meetings began in the Pastor's living room but after one year, the space proved too small. God in His goodness through friends enabled us to put up a marquee which we call 'Tent of meeting.' It can seat up to 100 people. The church is praying for a piece of land upon which it can build a sanctuary as it is using the front of the Pastor's rented house. We are a church that believes, preaches and teaches the Bible (66 Books) as the whole counsel of God. We adhere to the 1689 Baptist Confession of Faith. We teach and uphold the Reformed Faith or as commonly called 'The Doctrines of Grace.' We pray and labour towards seeing the Reformed Faith spread in our cities and towns and this in turn will have its influence in our villages. We have 18 in the membership those who profess faith in the Lord Jesus Christ and have been baptized.